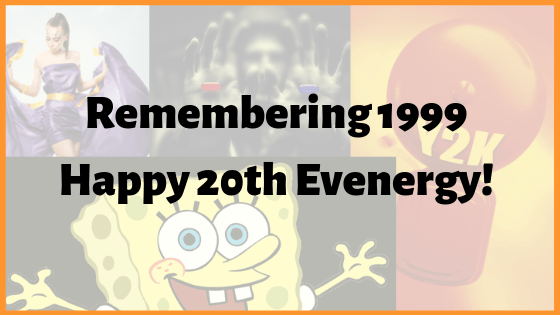 Do You Remember When You Were 20 Years Old?

We are happy to be celebrating our 20th year in business with a new logo, new brand image and new website. We offer our best wishes to all of those who’ve been with us along this journey and invite more of you to join the ride!

In addition to our 20th anniversary this year, we anticipate 2019 to be a year of growth and new adventures. But we also think it is always a great idea to reflect. Who remembers 1999?

1999 was a big year when it comes to pop culture happenings. The first thing you might think of is Prince’s song Party like it’s 1999 – which was first released in 1983 and then re-released in 1999 for the big New Year celebration. Ford started making the Focus for the first time, Lauryn Hill set a Grammy record by being the first female ever to be nominated 10 times in one year, Nelson Mandela retired, and of course, the famous Y2K bug that was going to wipe us all of the map… fizzled when we all happily made it to 2000 with no issues!

Here are a few more fun facts in pop culture from 1999 and the year Evenergy was just getting off the ground in Kansas City.

Movies that were released:
The Matrix
Star Wars Episode I: The Phantom Menace
Fight Club

Albums that came out:
Blink 182 – “Enema of the State”
Red Hot Chili Peppers – “Californication”
Destiny’s Child – “The Writing’s on the Wall”

In the world of sports:
Wayne Gretzky plays his final game of hockey and is inducted into the Hockey Hall of Fame.
St. Vincent-St. Mary High School wins the division III state title with freshman LeBron James.

Is there anything else you would add to your list of awesome things that happened in 1999? Can you remember that far back?

We are excited about opportunities with clients this year. We have a renewed spirit of excitement as we kick off our 20th year sporting a new logo, new website and fresh new branding. Please let us know if we can help you with upcoming corporate events, experiential marketing, sponsorship activation plans and promotions… and as always we appreciate your referrals.

As we like to say: Bold Brands Wanted. Let us tell your story, tap into a meaningful connection with your audience and bring your brand to life.